Changing the World One Recess at a Time 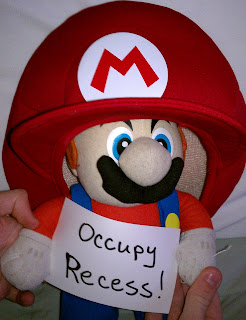 Jack is not exactly an outdoor boy. He would rather be in front of a computer or a video game console than almost anywhere else in the world. That's why I was so surprised that he and his school buddies had taken to playing a game at recess with the unfortunate name of "Butts Up." I don't know all the details, but I understand it involves hitting a big rubber ball against the outdoor wall and then kids doing stuff with the ball. There may have been some throwing of the ball at other children.

For some reason this game became banned by the yard duty ladies in the past couple of weeks. Most likely safety issues were involved. Jack and friends were not pleased. "It's the ONLY thing I like to do at recess," he moaned.

Well, Jack and his buddies have been watching the news. They've seen the Occupy Wall Street protesters on TV. Jack saw the footage of the UC Davis students peacefully protesting yet another tuition hike and getting pepper-sprayed in the face for it (seriously, Channel 13, how many times do we really need to see that horrific footage??? Enough already!). He's heard the stories his dad tells about how people in the 60's protested against the war in Viet Nam. He learned in school about the colonists protesting against British rule (hello, Boston Tea Party!) when they were unhappy about the way things were going. This country was founded on Freedom of Speech and the right to peaceful assembly.

So they did the obvious. They decided to Occupy Recess. Mostly this involved about 10 or so boys and girls chanting, "We want Butts Up! We want Butts Up!" during recess. The yard duty ladies were amused. The Principal and Vice Principal were called in. Phone calls to parents ensued. No law enforcement agencies were involved. No television cameras were on scene to record and replay events endlessly on the late news. No one got pepper-sprayed.

Once the dust settled, the kids were instructed to collaborate on a set of rules agreeable to everyone that would meet school safety rules. If the Principal decides they're acceptable, Butts Up could be reinstated.

An American Civics lesson come to life: when you see something wrong, take action to change it. Our little radical. He makes us proud!
Posted by Jaxmom at 12:26 PM