Eating is a Chore?! 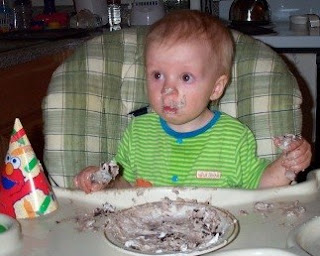 Jack told me the other day that he feels like eating is a chore, something he has to do but doesn't really enjoy that much. Can this possibly be my son? Could he have been switched at birth? Unfortunately, eating has always been one of life's greatest pleasures for me. I was raised in a household where food was always associated with everything that was pleasant: popcorn for the movies, cake for birthdays, ice cream for a special treat when we were out for a drive. And candy (always candy!). "Eat all your dinner and you can have dessert!" My mom was a pretty good cook, so we always had homemade cookies, cakes and pies in the house. All the holidays revolved around special foods: Fourth of July barbecues with hand-cranked ice cream, Halloween candy and cookies, Thanksgiving turkey and pumpkin pie, Christmas cookies & fudge. Even New Years was a food holiday in our house: we always had trays of chips and dip or salami and cheese to snack on while waiting for the ball to drop at midnight.

I still go through a good part of every day looking forward to what I'm going to eat at my next meal. But Jack is different. Even as a baby, we noticed he wasn't especially interested in food. He loved his formula and would drink it greedily when he was hungry, but he was just never very interested in the finger foods other babies seemed to enjoy.

On his first birthday, he played enthusiastically with his cake. Had it all over his hands and face, but not a morsel went into his mouth. Just not interested. We used to have to do a floorshow to get him to eat at all. We'd have toys on the tray of his high chair and distract him with silly faces and funny noises, while trying to shovel organic baby food into his tiny mouth. This was moderately successful, but he never really showed much interest in feeding himself.

Jack has Autism (PDD-NOS), ADHD and Sensory Processing Disorder. His brain processes things differently than those of us who are "neurotypical." Things that smell or taste delicious to the rest of us, can  have an unpleasant odor or taste to him. Textures can also be very disturbing to him. He cannot abide potatoes (my absolute favorite vegetable!) in any form: no french fries, no potato chips, no potatoes mashed, baked or fried.

Getting enough calories into him has always been a challenge. He never asks me, "What's for dinner?" He doesn't open the refrigerator looking for a snack. He never begs me for something to eat because he's "starving." I'm not even sure he realizes that he's hungry at all. Sometimes I forget to give him lunch and realize it's 5:00 o'clock and he hasn't eaten since breakfast. Doesn't take after his Mommy at all!

Jack is much more than just a picky eater. It's like the part of his brain that relishes eating is just not there. I'll ask him, "What would you like for lunch?"

And when he does eat, it's only enough to keep him going. He rarely, if ever, cleans his plate or asks for seconds. Who knew that feeding one skinny eleven year old boy could be such a challenge? How could anyone think of eating as a chore, rather than as one of life's greatest pleasures? Whoever heard of such a thing?
Posted by Jaxmom at 12:20 PM