To Sleep, Perhaps to Dream 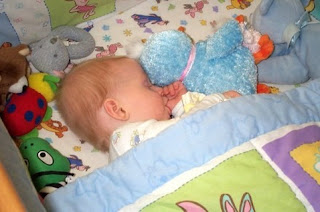 Sleep issues! Where to begin?

When Jack was a baby, he slept like, well, a baby. He'd wake up every few hours, I'd changed him, feed him and put him back to bed, where he'd usually go right back to sleep. My husband likes to tell people Jack slept through the night right from the get go. Um, no. I was just a very considerate wife who got up with the baby as soon as he made a peep. I knew I could catch a nap later in the day, since I was the stay-at-home. Hubby needed to sleep, since he was off to work in the morning. Slept through the night, my hiney!

Somewhere between his first and second years, the pattern changed. He was still great about taking daytime naps. I could put him down in the afternoon and I'd be good for two or three hours of uninterrupted Mommy time. (I know some of you hate me for this.) But the nighttime pattern started to change. 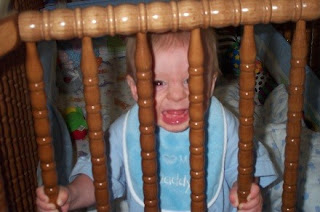 Somewhere around 18 months, Jack became a very light sleeper. He would go to sleep in his crib, in his own room, but wake somewhere in the wee hours of the morning, say two or three o'clock. Then we would hang out in the living room, trying to be quiet so Daddy could sleep, watching TV mostly. Eventually he would get sleepy and I could put him back in his crib and tippy toe back to my own bed.

It got to the point where we were afraid to go into his room during the night even to check on him. Should he open his eyes and see me, it was all over. No longer was it sleepy time, it was play time!

Around the time he turned two, his periods of nighttime wakefulness became more frequent. I stopped turning on the TV and just tried to encourage him to go back to sleep. Eventually I just let him fall asleep on the living room floor, covered him with a blanket and went back to bed.

Thinking perhaps he'd just outgrown the crib, I thought a "big boy bed" was the answer. We bought him a sweet, little toddler bed. He was delighted with it. But sleep in it? I think not! 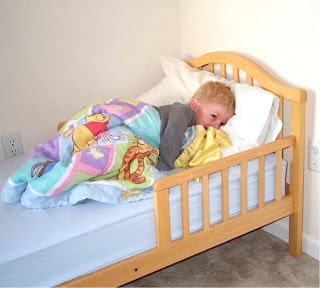 Eventually we just threw a crib mattress on the floor next to our bed. This was fine for a while, except for the fact that he would stay up and watch TV with us until we turned off the light. I was sure we had the only two year old in the neighborhood who watched David Letterman.
Once he started preschool, we had to amend this routine. He was still sleeping on the floor next to our bed (on his own little toddler mattress, of course), but I didn't think it was good for him to be up till all hours if he had to be at school at 8:30. Our bedtime routine became, bath, teeth, stories, then me lying on the bed next to him until he fell asleep. This involved many nights of me trying to sneak off the bed, thinking he was asleep, but as soon as he heard the mattress creak, he'd cry out, "Mommy! Don't leave!"
Jack was in the middle of first grade (6 1/2) when we moved to our new house. He had a beautiful new room with a great big bed in it, but was still sleeping on the floor in our room. Shortly before Christmas that year (he was now 7), I asked him, "Don't you think Santa would be proud of you if you slept in your own room?" To my great surprise he actually bought it and did sleep in his room for a period of about six weeks--till the neighbor kids told him about kidnappers and "bad men." Back in our room on the floor again. Sigh.
Here we are over three years later. Jack is now 10 1/2 and in 5th grade. We now have him falling asleep in his own bed, but he still comes into our room when he wakes during the night. For a while there, he would lie awake until Dad and I turned off the TV in the living room (sometimes an hour and a half, from 8:30 to 10:00 pm!) and then "sneak" into our room to sleep on the floor. With the okay of his doctor, he now takes a very small dose (3 mg) of Melatonin to help him fall asleep (I've read that children on the Autism spectrum don't produce the natural Melatonin they need to fall asleep easily). We have a sleeping bag on the floor now instead of a crib mattress. Some nights he doesn't arrive until 3:30 or 4:30. Only once in the past several months have I woken up in the morning to find him sleeping in his own bed. On that occasion he was actually upset that he'd slept through the night in his own bed (change in routine is very difficult for him) and had to go lie in his sleeping bag for a few minutes to regulate himself. Once I heard him come in at 6:30 and get into his sleeping bag, barely in time for the alarm. Sometimes he'll come into our room and lie awake from the time he arrives till it's time to get up. He's just not a good sleeper.
This is all new to me. When I was a kid, it was very rare that I didn't sleep through the night. I remember snuggling in my bed and next thing, POOF! it was morning. I wish Jack could sleep like that, but his brain is just wired differently than mine. Hopefully by the time he's a teenager, he'll be sleeping in his own room. I can't see him wanting to bunk in with Mom and Dad when he's sixteen. And I'm certainly not going off to college with him. Been there, done that.
Posted by Jaxmom at 2:11 PM