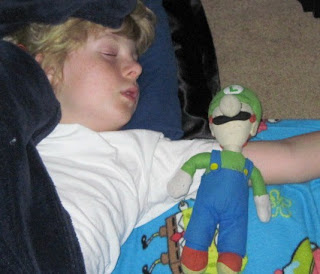 Some animals eat their young. And I think I know why. They're probably sleep deprived because their little ones won't let them sleep.

Charlie's been working some late nights lately. It's really hard on him, cause he's not a night person. He doesn't have as much energy as he used to. When we were first dating, we could both work all day and afterwards go to dinner and a movie. These days I'm in my pajamas as soon as the sun goes down. We're normally in bed by 10:00 pm. Might watch the news for a few minutes, but I'm usually out by 10:30. I have to get up early to get Jack off to school. There is no sleeping late in this house. Jack won't allow it.

He's gotten pretty good about falling to sleep in his own room most nights. We have a whole bedtime routine we follow: bath, snack, reading, teeth, bed. The flannel sheets and pre-warmed bed (I turn on the electric blanket when he gets in the shower) make his bed all cozy and sleep-inducing. A small dose of doctor-prescribed Melatonine helps, too. But sometime during the night all this coziness wears off, and then he's awake.

Usually when he wakes in the night, he just stumbles into our room and crawls into the sleeping bag that's a permanent fixture on our floor. Most nights I'm not even aware of his arrival. I just find him sleeping there in the morning. It's those occasions when he wakes early in the morning and can't get back to sleep that are a problem.

Today was one of those mornings. My sleep was interrupted by lots of rustling sounds from the floor below my bed. "Jack, be quiet! Daddy and I are trying to sleep!" More rustling noises. "If you can't sleep, get up and go play on the computer. But be QUIET!"

"Just go out and be quiet!"

By this time, Daddy, who didn't get to sleep until after midnight because of his late shift, is awake and not happy about it. "Jack, if you can't be quiet, you're gonna have to sleep in your own room from now on!"

Lots of self-recrimination ensues on Jack's part. "I'm so stupid. I don't deserve breakfast. You should just kill me!" Such a drama queen!

I have to remind myself that his brain works differently. He just doesn't seem able to empathize with the feelings of others. My friend Melinda says he's very "self-focused." That's one way to put it. He'll cry and be upset if he sees animals or children being mistreated on TV, but he doesn't seem to be aware of the feelings of those around him.

One of my favorite shows is "Parenthood" on NBC. They have a character on the show, Max Braverman, who has Aspergers. His behaviors are very similar to Jack's. A few weeks ago they had an episode where Max's parents have promised to take him to a museum, but they end up having to work that day and aren't able to go. Max's sister has to study, so she can't take him. Max, who is about the same age as Jack, decides to go by himself. He ends up getting lost and being returned home in a sheriff's car. Max's sister, Haddie, is the neurotypical sibling who bears the brunt of Max's behaviors and has just had enough. Watch her reaction when Max is returned home to his family: Max Comes Home (Parenthood). He's completely clueless about the worry and anxiety he has caused all of them.

Jack's world pretty much revolves around Jack. I don't think it's so much selfishness as it is self-absorption. He can be very loving and sweet, but he's very focused on his own needs, often to the exclusion of the needs of others. I'm hoping we'll be able to teach him to think of others a little more. I'm just not sure how much his brain will let him. But we'll keep trying.