Autism: Being the Child on the Outside 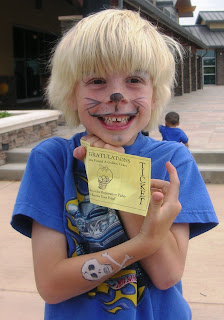 My son Jack has autism. We only found out he had autism a couple of years ago (when he was 8 1/2), and even then nobody ever actually said the "A" word to me. I was told he had PDD-NOS (Pervasive Developmental Disorder--Non-Specific), SPD (Sensory Processing Disorder) and ADHD (Attention Deficit/Hyperactivity Disorder). It was another year or so before I understood that PDD is autism.

Suddenly everything made sense! The sensitivities, the meltdowns, the food issues, the behavioral problems at school. Suddenly we gained a much better understanding of why our child is the way he is, and have continued to learn as we've read and shared with other parents of children like ours.
Two and a half years before Jack's diagnosis, we bought a house in a brand new neighborhood and moved out of the apartment we'd lived in since Jack was three. Suddenly he had a yard to play in. And there were other children outside to play with, too! There were several other families on our street with kids his age, even two sets of twins. He was thrilled!
Every Saturday morning he would wake up and couldn't wait to get outside to play with the other kids. I would have to insist that he couldn't go ringing doorbells until at least 9:30 or 10:00, cause some people actually liked to sleep in on Saturdays. He would lurk on our neighbors' porches or on the sidewalk in front of their homes, waiting for their blinds to open so he'd know they were awake. One mom even told him (rightfully so) that he was only allowed to ring her doorbell once a day! He was so anxious to play with the other kids that he was starting to make a pest of himself.
At first everything was fine, but then we started to notice problems. He started coming in the house crying that someone had called him a name. Someone had called him "Loser" or "Retard." I would see kids try to run him over with their bikes or scooters. For some reason the other kids started ganging up against him. They decided it was fun to provoke him, since it was pretty easy to get his goat (his doctor calls it "low frustration tolerance"). They thought it was funny to make him mad, but then when he'd lash back, usually in some physical way or with inappropriate language, the parents of the other kids labeled him the Bully. The other parents didn't seem to understand why it was such a big deal for the kids to tease him and provoke him. That's just what kids do, right?
After a while the little boy down the street who seemed to be his favorite playmate (a couple of years younger than him; Jack has always seemed to get along better with younger kids) would just answer the door and say, "Go home!" One day his bicycle was taken and hidden all afternoon. It was only returned when my husband threatened to make a police report. Then all the kids on our street decided to have a club. Jack was not allowed to be in the club, and the only rule of the club was that you couldn't play with Jack. My husband decided that he and Jack would have their own club. They sat on our front porch for an entire week, glaring at the other kids as they rode their bikes back and forth in front of our house.
I tried talking to some of the other parents, but they just didn't understand the problem. They thought the kids were just being kids, and it was Jack who was the "bully," right?
About a year ago, one of the little girls started a nasty rumor about Jack having something inappropriate on his cell phone. My good friend, whose daughter loves Jack and is a good friend to him, heard this rumor from the girl who started the story. Despite the fact that this would have been way out of character for Jack, the first thing I did was to look in his phone and see if there was any truth to the story. Nothing. Then I asked the little brother of the girl who started the story (who happened to be at our house playing) if Jack had ever shown him anything inappropriate either on his phone, the computer or anywhere else (you never know). This little boy told me, "Oh yeah, my sister made up that story! It's not even true!"
When I sent an email to one of the moms whose child was spreading this story, this was her response, [her child] "came to me, around the beginning of this month, and said he thought he saw a penis on Jack's phone. When he had asked Jack to see it again, because he wasn't quite sure, Jack shoved his phone in his pocket and ran away." Okay, I can understand that. Jack was embarrassed and didn't know what to say. Communication issues and social awkwardness, anyone? Not wanting to get into a war of words with this mom, I gave up and let it go. What's the point of trying to convince someone who's going to believe what she wants to believe?
So for the last year we've pretty much been hermits, hibernating in our own house. Last summer Jack spent the entire summer creating his own video game on the computer. This summer he's spent a lot of time playing with online friends on the PS3 and making videos for his YouTube page. We make play dates with his school friends (he goes to a charter school outside our neighborhood), and he enjoys the friends he's made and activities with his Sunday school group, but otherwise we keep to ourselves. He also has one very special little girl who lives a couple of blocks from us and is still his friend, even though she catches heat from the other kids for it. We just try to ignore the kids on our street.

But then a couple of nights ago, we were just sitting in the house minding our own business when BAM! The dogs started barking and my mom goes, "What was that?" I looked out the front window and saw water all over the front porch and little pieces of orange latex. A water balloon? Really?! I looked across the street and saw all the kids huddled behind the SUV in their parents' driveway, looking toward our house. I waited a few minutes and when I saw one of them walking back this way with a balloon in her hand, I stepped out on the porch and warned her, "Throw one more water balloon and I will call your mother! It's not funny and it's not nice, so you can stop." Okay, I yelled at a little kid. I'm just so tired of the meanness.
I feel so sad when I look out the window and see them all playing outside. I wish Jack could be a part of the group, but it's best just to keep him in. We've had far less drama, tears and sleepless nights (me) since we decided to withdraw from the neighborhood. I know this might not be the healthiest way to live, but you do what you need to do to protect your child.

I've heard from other autistic families about how "neurotypical" children often recognize and ostracize children who are "different." Yes, my child's a little different. But he's still smart, funny, loving and worthy of respect. They're the ones missing out on knowing such a sweet boy. But my heart still hurts for him.
Posted by Jaxmom at 5:00 PM