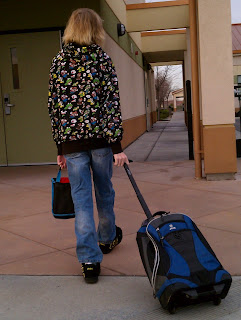 We finally did it. After talking about it for months and months--or has it been years?--we finally pulled Jack out of school this week. We're taking the plunge into homeschool. We're not mad at anybody. There was no particular incident that decided us. But after years of hearing your child say he hates school and it's torture for him, when he lies on the floor every morning and cries, "I don't want to go to school. I hate it there. Please don't make me go," it's time to pull the plug. He was in a very good school. It just wasn't the right place for him.

We were hoping he'd be able to finish the school year with his friends. He's been with mostly the same group of friends since kindergarten, some since preschool. We were hoping to see him graduate with his buddies, but it's just not to be. We all feel like we've been beating our heads against a brick wall for years now. It feels so good to finally stop!

Our hope is to establish a kind of free-range schooling style. Now that school is not a brick and mortar environment, learning is everywhere! Going to the store is a field trip! Watching a documentary about bugs is a science lesson. We had a conversation about World War II the other day in the car, and Jack expressed an interest in learning more. Now that he's not in school so much of his day, he's not so resistant to learning something in his "off" time.

The past couple of mornings Jack has been the first one up. No longer worried about having to get ready for school, he looks forward to just being at home. We'll probably put him into a more formal homeschooling program down the road, but for now we're all just decompressing. Taking some time to unwind and think about which way we want to go now that we're able to map our own educational journey.

I'm going to a support group for homeschooling moms tonight. I'm looking forward to meeting some other moms in our area, looking forward to building a new community. It's kind of a bittersweet process. We're all glad to be free, and yet we'll miss his friends from school. We still hope to see them, but it won't be the same now that they won't be together every day.

There's a sense of adventure in our house, though. Charlie was talking to Jack this morning and he said, "You know, Mom and I are a little nervous about this homeschooling thing. It's kind of scary."