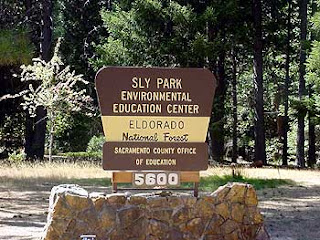 Next week Jack's 6th grade class is going to Sly Park Environmental Education & Conference Center for a whole week of outdoor study. I'm going along as an adult chaperone. I cannot tell you how excited I am to be going. Seriously! A lot of people would think a week at science camp with a bunch of wild 6th graders doesn't sound like much of a vacation, but I'm so looking forward to it!

They didn't do this program when I was in school (back in the dark ages, you know), so I'll be experiencing the program for the first time along with Jack. I'm looking forward to spending some quality time with him and his buddies, even though I'll be bunking with the girls all week (heated cabins and hot showers--yay!). Jack is still at an age where he doesn't really mind his mom being around. With his issues in particular, I think it will be a comfort to have me nearby in case he feels overwhelmed by the unfamiliar surroundings. I'll also be handy should there be any questions regarding his medications or behaviors. This is a golden window of opportunity for me to share this adventure with him. In a couple of years, he'll be a teenager and may decide that Mom's not so cool anymore.

He's also very lucky that he's been at the same school since kindergarten. Because it's a high performing charter school with a great reputation, there's a long waiting list for admittance. People don't tend to come and go much at his school, since it's so tough to get into (lottery system), so he's pretty much been with the same group of kids for the last six plus years. Some he's known since preschool. They have a lot of history together, so they're used to each other and more accepting of each other's personality quirks. There's not a lot of teasing or bullying that goes on, for which we're deeply grateful. He might not have had that experience at another school.

My biggest concern about him being away from home for a whole week has been his food issues. He's an extremely picky eater. Recently he's shown some interest in trying some new things and discovering he likes them (hello, Chick Fil A chicken sandwich and Fiber One Brownies). I'm hoping he'll be hungry enough at camp that he'll try some new things and won't starve to death in five days. I also hear the food there is very good. Gonna have to restrain myself!

I did call and speak to the camp nutritionist this morning about his soy milk. She was very kind and reassured me that he'll have a place to keep his milk and will be able to access it on his own, as needed. We just need to introduce ourselves when we arrive.

My hubby Charlie is taking off from work next week to keep an eye on Gramma while I'm gone. She's 88 and needs some help with things. I'll be educating him over the next few days about all the stuff I usually take care of when I'm home. Things like how to turn the heat on and off, how to operate the gas fireplace, how to switch Gramma's TV over to the DVD player and back again. It's a little bit hard for me, cause I'm used to being in charge around here, used to being the one everybody comes to when they need something. I'm making a list for him of things he needs to get done each day, writing down important phone numbers and will have her medications all organized for the week.

Whew! It's a lot of work getting ready to be away, but I do appreciate his willingness to take over and give me a few days away. He's a good cook and not afraid to take care of things like cleaning up, washing dishes and doing laundry, although I've spoiled him a little over the past few years. He works hard for Jack and me, so I try to keep things going here at home as much as possible.

Not sure if I'll have access to a computer next week (or the time to write!), but I may try to post a picture or two of the area (have to respect the privacy of the campers, so may not have any of them I can share). I'm sure I'll have lots to tell you when I get back from camp!