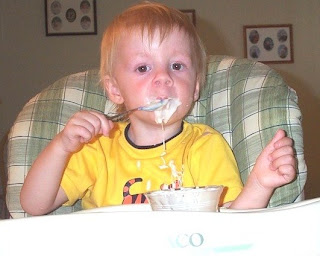 I think we may be going through a growth spurt. Jack's sleeping well. He falls asleep pretty easily at night and doesn't come into our room to sleep on the floor till the wee hours (one morning lately it was 5:30 before he made his nightly trip from his room to ours). But the most amazing thing in the past few days is that he's eating! I bought a big box of Fiber One 90 Calorie Brownies the other day at Sam's Club. Mostly for me. And as they're individually wrapped, I thought they'd keep longer in the pantry and not get dry and stale.

I gave one to Jack to "see if you like this" the other night. He LOVED it! So now he gets one in his lunch for school, but he also asks for them at home. He ASKS for food! Kind of weird. Especially since he's not really a big chocolate guy. The other night he ate THREE of them after dinner! Just now he ate two after his hot dog lunch. Wow! Very unusual behavior for him.

A week from Monday his entire 6th grade class is going to Sly Park, a science camp for elementary kids in the Sierra foothills. One of my biggest concerns about him going away for a whole week has been his issues with food. Maybe he's starting to grow out of it? I'm hopeful that when he's at camp, he'll see the other kids eating everything and be willing to try some new things. I've heard the food there is very good. And I'll be there to keep an eye on him (I'm going along as a parent chaperone).

Having grown up with two boys in the house, I know teenage boys can eat. You have to hurry up and get your fair share before it's gone when there are boys in the house. I just never imagined we'd go through that with Jack. I guess we're in for it now!
Posted by Jaxmom at 11:42 AM