The Science Fair was Friday night. I thought "our" project turned out beautifully, but only received a "Participant" ribbon. No "Superior" or "Judges Award" for us. I was more disappointed than he was. He was more interested in playing on the jungle gym outside the auditorium with his friends at nighttime in the dark! Oh, the adventure! 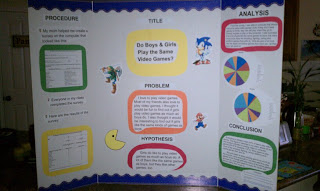 On our way home I took him to In-n-Out Burger for a treat. He had a plain cheeseburger: just a bun, meat and cheese. He liked it at first, but then said it made him "feel weird." Not a big meat-eater, my sensitive boy. I ended up eating the last third of the burger, even though I certainly didn't need the calories. Can't let food go to waste!

Now that the Science Fair is in the rear-view mirror, the next big event coming at us is the Age of Sail field trip. His entire 5th grade class is going to San Francisco, to spend the night on the Balclutha sailing ship. It's anchored at the Hyde Street Pier across the street from Ghirardelli Square. He's never been away from home overnight without Mom and Dad, so this is a very big deal. We've known about this since the beginning of the school year and at first the very idea of him being away from us overnight terrified me (What would he eat? What if he has a meltdown? What if he totally freaks out when we're two hours away and can't immediately come and get him?). My husband always just says, "He'll just have to deal." What if he can't deal? How will I deal?

We never got around to having that sleepover with a friend to practice being away overnight (I'm such a bad mommy!), but I'm a lot more comfortable with the whole thing now. His teacher has done a very good job of preparing them to live on a boat for 24 hours, and he's actually excited about it. His class has been divided into crews: Galley Crew, Deckhand Crew, Boat Crew, Rigger Crew, Bo'sun Crew. He's part of the Bo'suns, which has to do with tying knots or something. They have to eat "authentic" food and stand watches during the night. They will sleep on the inside deck of the ship and listen to the night sounds of San Francisco Bay. They will have adult chaperones, but the adults are only there to observe and keep people from getting injured.

They're supposed to be "going back in time," experiencing what it was like to live on a sailing ship a hundred years ago. All the parents were asked to write letters, which will be delivered by the Captain at Mail Call. I got teary writing mine, imagining him reading his letter far from home, without me for the first time. I got teary imagining him getting teary and homesick reading my letter. Tried to be offhand and casual, but is this letter thing really a good idea for a sensitive child who tends to over-react to things? Hopefully my letter won't be the thing that precipitates a panic attack and reminds him that he's far from Mom and Dad and won't be able to sneak into our room in the middle of the night.

I know I'm being silly, especially when you think of all the mothers whose boys and girls are far from home for much longer periods of time. I can't even think about mothers and fathers of soldiers in Iraq and Afganistan without getting teary. But I'm sure those of you with children with special issues understand the worry of not knowing what's going to be a problem for a child whose brain is wired differently. Sometimes the unexpected is the problem. Children on the autism spectrum don't do surprises all that well.

At the moment, he's very excited about riding on a bus for the very first time (except, as he reminded me, that one time at Disneyland from the hotel to the park and back again). He's excited about being in the same crew with his very best friend, William (thank you, Mrs. Dresser!). I'm trying to keep a brave face on and talk about how much fun he's going to have and how he'll remember this experience with his friends for the rest of his life! (Please, God, don't let me cry when I say goodbye to him on Tuesday morning!)

We get to pack his bag this afternoon with the things he'll need on his trip, mostly a change of dry clothes in case he gets wet from the ocean or the weather. They're all taking their bags to school tomorrow to make sure they didn't forget to pack anything (what a great idea!).

I'm sure it'll be fine. I'm sure he'll have a wonderful time. Our house is going to be awfully quiet Tuesday night, though. And I'll have my cell phone by my side the entire time. I'll let you know how it goes. 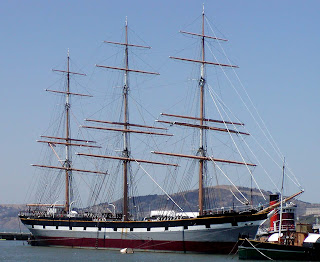