Something's Funny Behind the Door 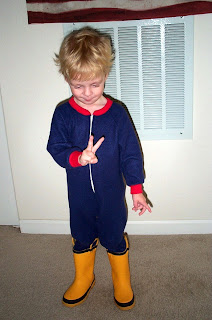 I have a folder in my Outlook email called "Jackisms." When Jack was smaller, I would write down the cute things he would say or do and save them in that folder. You forget so much as they get older. I wish there was a place you could save that baby smell. Not that one, the good one. The fresh out of the bath in the clean jammies smell.
When Jack was two, we lived in a very small apartment. Here's a story I recorded for posterity nearly nine years ago. I hope you enjoy it as much as I do re-reading it now:
The second bathroom in our apartment has two doors: one enters from the hallway (of course) and the other leads to Jack's bedroom (or I should say, "playroom" cause he certainly doesn't sleep in there--he prefers the dormitory style sleeping arrangements of Mom and Dad's room). Since we moved in last summer, I have kept the door between that bathroom and his room closed and locked for reasons of space. He has so much stuff in his room (tricycle, jogger, scooter, toy shopping cart, etc.) that we needed the extra wall space afforded by keeping the door closed. Last night he was in the bathroom with me and started asking if we could open the extra door. He was jiggling the handle and saying, "What's this, Mommy?" Suddenly it dawned on me that he had no clue that his bedroom was behind that door. I asked him what he thought was behind the door, and he said, "Blankets?" He thought it was another closet!
So, for the first time in nearly a year, I unlocked the door to the chamber of mystery  (pardon me, I've been reading Harry Potter). He peeked through the door and immediately started giggling, "It's my room!" He thought that was the funniest thing he'd ever seen! He kept going in and out of the door, and even went and dragged Charlie away from the computer. "Daddy, come see what's funny!" He was laughing so hard, he could barely stand up.
This morning when we got up, he was still at it. "Daddy, come see what's funny!" Who knew that opening one small door could be such a huge source of delight and entertainment? It just goes to show that you never know what surprising things you'll find if you have the courage to open the door and find out what's on the other side.
Posted by Jaxmom at 1:17 PM