Diagnosis: It's Just the Beginning 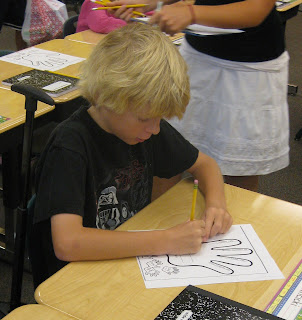 Third grade was a really tough year for us. I'd been begging Jack's teachers and pediatrician for answers ever since kindergarten. Nobody seemed to see any cause for concern. Except for the fact that he was always in trouble. Except for the repeated trips to the principal's office and the damn Behavior Slips. He's always been such a sweet, loving little boy. Well, except for the giant meltdowns.

One day we came straight from a conference at school (both parents, two teachers and the principal--serious stuff) to a play date at the park. I was in tears because I had just been told that one of the other parents had decreed that they no longer wanted their child to be allowed to play with mine. And of course, the teachers couldn't tell me who it was, because they "aren't allowed to discuss other parents or children." Confidentiality and all that (but the other parents were sure as heck allowed to talk about me and my family, huh?). As I was describing Jack's behaviors to another mom, she gently suggested that I should, "Go home and Google 'Sensory Processing Disorder.'" I did, and it was as if someone had suddenly turned on the light in a dark room. I ticked off symptom after symptom that matched my son's behaviors. Now I had a new question: why did it take another parent (bless her soul, she'll always have a special place in my heart!) to diagnose my son, when I'd been asking his teachers and doctors about it for years?

The final straw came at the end of that school year. My husband Charlie, who'd instructed the school to call him first the next time Jack was sent to the office, called me around lunchtime and said, "You need to go pick Jack up from school. He's been suspended." Turns out he'd lost his temper with another child and tried to choke him. He was suspended from school for the last day and a half of the school year, and we weren't even sure if he'd be allowed back.

Though Charlie and I were devastated that he was suspended, Jack considered it an early start to his summer vacation. School was not a happy place for him. He cried and said, "I hate school!" every morning on the way there. It was a constant battle to try to get him to have a positive attitude and look forward to the fun things about school: his friends, art and music, recess.

Immediately following that suspension (who gets suspended from the third grade anyway?!), I made an appointment with Jack's pediatrician and showed him the list of SPD symptoms that Jack was exhibiting. Finally he did some more blood work (all negative) and referred us to a family psychiatrist. I made an appointment with a doctor a friend had used with her son, and we came out of that first appointment with a diagnosis of Sensory Processing Disorder and Pervasive Developmental Disorder--Non-Specific (later ADHD also). He gave us a prescription for impulse control, recommended some books for me to read and off we went.

My husband and I started a voracious reading campaign (see Recommended Reading list on this page) to educate ourselves as much as possible to help our boy. Even then, it was several months before I even realized that Jack had Autism. Nobody ever said the "A" word to me and it was a long time before I found out that PDD-NOS is on the Autism Spectrum. But the more I read, the more everything made sense. Knowledge is power!

The best thing about finally having a diagnosis is that now we know he's not a behavioral problem. He has a developmental disorder that causes him to respond (and overreact) to things in a certain way. If he's overwhelmed or frustrated, if everything gets too chaotic for him, he can respond in one of three ways: 1) he can get angry, 2) he can cry, or 3) he can retreat. Now we know a little more and can try to avoid situations that will demand too much of him or provoke an unwanted response. We have a legal right to special consideration, since he has a disability.

We're still learning, but now we have some tools to help us along the way. We have regular meetings with Jack's teachers, his principal and the school psychologist to help formulate plans for his success. We meet once a month with his doctor (a gentle, soft-spoken man we all adore). He has a team of people smoothing his way, including his Mom and Dad who are his biggest advocates. Next month he'll enter the sixth grade! We have high hopes for his final year of elementary school, as well the rest of his life. Diagnosis was only the beginning.

One final postscript: the boy who got choked, prompting Jack's suspension? He became one of Jack's best buddies in fourth grade!
Posted by Jaxmom at 10:40 AM