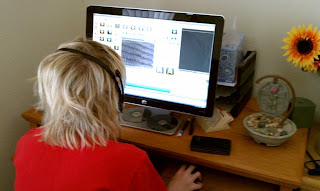 Had a lovely play date yesterday with a school friend. The boys entertained each other for nearly five hours (stopped at noon for pizza), and I was able to have a really good visit with the my dear friend, his mom. No arguments, no fights. It was great!

The key to a successful play date with Jack is to invite someone who shares his interests. His little buddy was excited to see the latest installment of the computer game Jack's been making. They also spent time playing video games and finished out the afternoon working very intensely on Legos. Really nice day.

Today we don't have any plans, so he's back on the computer. He can spend hours and hours on the computer, looking at YouTube, creating videos to post to his YouTube page and working on his own animations and video games. The things he can do on the computer really amaze me.

Jack has an incredible ability to focus for long periods of time. When he was just 6 years old, his Obsession du Jour was Star Wars. For Christmas, he begged us for a Lego set of the Imperial Star Destroyer, a kit of nearly 1400 small pieces targeted at 9 to 14 year olds. He put it together in two days. Worked on it all alone for nine hours on Christmas Day (only needed assistance snapping together some of the harder pieces). We only managed to pull him away for meals and bathroom breaks. Finished it mid-afternoon the day after Christmas. Yikes! Our little engineer! 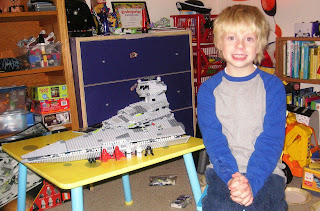 Last summer we'd had issues with the neighborhood kids being mean to him, so we all decided it was best for him to stay inside and avoid the drama. We tried to arrange as many play dates and activities as we could, but he's really happiest when he's at the computer. He has a lot of followers, subscribers and friends on YouTube. He prefers to use the messaging function to communicate with his buddies, rather than using traditional email. (All messages routed to his YouTube channel come through my email account, so I monitor everything and have been known to delete messages and block people, much to Jack's dismay! He says, "I don't care if they say bad things. Comments are good. It doesn't hurt my feelings!" Maybe not, but it hurts his mother's.)
Posted by Jaxmom at 1:46 PM