One Tuesday Morning in September 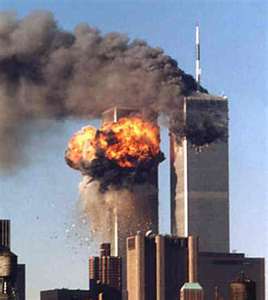 It was just another Tuesday morning. I'd gotten up early as usual with my not-quite-one-year-old son. My husband got ready and went off to work. Playhouse Disney was on the TV. Just a few minutes later, Charlie called me on his cell, "I'm listening to the sports channel, but they're not talking about sports. Something's going on and I think it must be pretty big. You should turn on the TV and see what's happening."

I changed the channel to MSNBC and at first couldn't make any sense of the pictures I was being shown. A plane crashed into the World Trade Center? And a few minutes later, another plane crashed into the other building? There's another plane out there headed for Washington, DC? And shortly after that, the World Trade Center fell DOWN? How is that even possible?

I stared unbelieving at the images on my television, unable to wrap my mind around the events being shown there. I watched in horror, trying to hold myself together and remain outwardly calm for the sake of my small son playing with his toys on the living room floor.

At the time, we were living in an apartment on the outskirts of Reno. Charlie was working, while I was home with our baby son and my beautiful view of the rugged Sierras off the back patio. My days were filled with Baby Einstein and Bear in the Big Blue House, long walks sandwiched between Jack's morning and afternoon naps, pushing him in his stroller. I was two hours and a mountain summit away from the rest of my family.

I did what everyone else did that day. I called everyone I loved and made sure they were safe. I watched surreal images unfold on TV. Images of tragedy and heroism, co-workers and strangers reaching out to help each other. Firefighters going into buildings and not coming out again, while their engines stood in the street covered with debris. New Yorkers walking across the city's bridges on foot, trying to get home to their families any way they could. Rescue workers unfurling a huge American flag from the side of the damaged Pentagon. Members of Congress standing shoulder to shoulder on the steps of the Capitol singing God Bless America. There were no Republicans or Democrats that day. We were all Americans. In this together.

As hard as I tried to appear calm and "normal" that day, somehow Jack, only eight days shy of his first birthday, perceived that something was not quite right with Mommy. On any other day, I could lay my sleepy boy in his crib, where he would immediately roll over onto his side, pop his thumb in his mouth and go right to sleep. But today he wasn't having any of that. He insisted that I hold him and fell asleep in my arms three times that day, once in the morning, once in the afternoon and again at bedtime. He was too tiny to understand that the world he lived in had been changed forever that day, but he could feel that something was wrong.

As the days went by, we stayed glued to the television, watching the disaster unfold. I depended on MSNBC's news anchor, Brian Williams, in his pale blue shirt and conservative necktie, to keep me up-to-date on the latest developments. By the end of the week, he almost seemed like a member of the family.

That Friday evening, September 14, 2001, three days after the events of 9/11, as we watched the current events on TV, Jack took his first unassisted steps across our living room. As we celebrated this milestone in our baby's life, I thought about all those parents who would never see their babies' first steps. So many loved ones were lost that day. But life goes on.

Those who tried to destroy us on September 11, 2001, failed. We're still here. We owe it to those who gave their lives that day to keep going. Keep living our lives and stay strong as a community and as a country. Life goes on. But we'll never forget that day or those whose lives were stolen on that Tuesday morning.