Sorry I haven't been here in a while. We've been busy with end of the school year activities. So much to do and only two more weeks to do it in!

Yesterday we went on a field trip with Jack's 5th grade class. It was a Civil War Experience at a regional park in our area. I loved it and found it really interesting (I'm a little bit of a history buff). He, of course, was bored. Too bad Mario wasn't involved in the Civil War or he would have been fascinated! 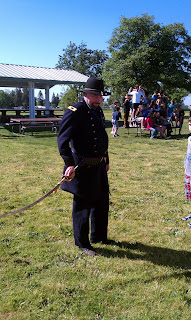 When we got there we were greeted by volunteers in Civil War garb giving us instructions. We went from station to station learning about medical practices of the era, California soldiers who fought in the war, cavalry and sharpshooters, cannons, what the soldiers ate and what people wore. There was a lot of walking involved between stations, but we were fortunate that the weather was cool and sunny, and there was a lot of shade available. 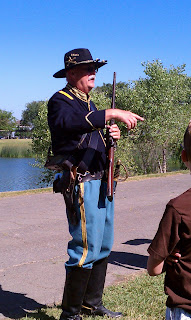 Jack got tired of walking from station to station. When he started in with, "When are we going home? I'm bored!" I had to instate the "no whining" rule. Too much walking for him. Too much standing at each station. He was afraid to sit in the grass, because there might be bugs. One of his buddies who has a bug obsession, actually found a big beetle and was thrilled with it. Jack, of course, was horrified and creeped out! 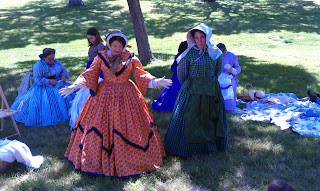 I learned a long time ago that this is the way it goes on a field trip with Jack. He's rarely interested in what anyone else is interested in. He doesn't see the value in talking about things or people who existed a long time ago. In his mind, it's all just a big waste of time and he'd rather be playing on the computer. I know this is partly just a kid thing, but I look at the other children engaged and asking questions, and sometimes wish he could be a little more like them. But then he wouldn't be the special, wonderful boy he is.

He is who he is. He has his gifts and talents--some of which are extraordinary!--as well as his challenges. But at the end of the day, we love him just the way he is.